A close-up photo of the seared duck…beautiful.

Within the past year, I have made it to Canteen (@Canteenyeg) on 124 Street just two times, the second of which was about 11 months after the first. Taking such a long break between visits was not due to the quality of the food. On the contrary, the first meal I had was delicious. I’ll chalk up the delay to Edmonton bursting at the seams with great restaurants that are kicking ass and taking names while keeping me from going back to previously tried eateries.

However, Canteen (sister establishment to the beloved Red Ox Inn) did warrant another tasting, especially since it has made The Tomato‘s list of 100 best eats and drinks in Edmonton for two years in a row now (No. 8 in 2013 and No. 40 in 2014). My initial dinner at the establishment happened well before my friend and I decided to tackle the 2013 restaurants. As such, I felt that we needed a more recent evening sampling their menu before I could give Canteen an actual review.

The lamb as my main course.

An order of the Chickpea Fries as our appetizer. 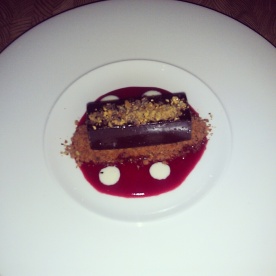 My chocolate ganache on the first visit.

During our original meal we had chickpea fries to share as our appetizer. Then my friend followed that up with an entree of white fish (likely halibut, tilapia or cod) as well as the bread pudding for dessert. For my main, I selected the lamb, and to finish off my meal, I had the chocolate ganache. Supper was incredibly filling, but completely satisfying.

This last dinner in October was no different. Arriving probably 15 to 20 minutes earlier than our booked OpenTable reservation, we were greeted warmly by the hostess who took us right to our table. 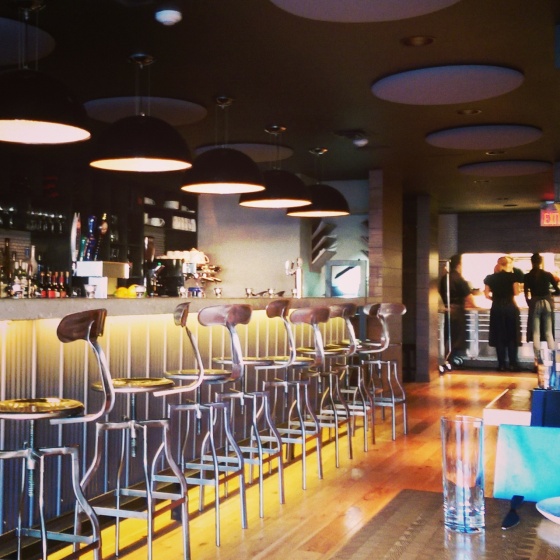 The interior of Canteen…very modern and industrial.

Our server came by to say hello, so we each chose a beverage off of the menu – a cider for myself and a cocktail for my friend – and we decided to split an order of the corn fritters with smoky maple syrup to start. I noticed that, while the selection of items changes regularly at Canteen, a number of the dishes remained the same as previous. That’s not a bad thing though. It kind of ensures that what you’re eating is likely what has remained popular with patrons and that, if you loved that plate, you’ll probably be able to get it when you return. The corn fritters were very tasty. Nice and fluffy, but crisp on the outside like little beignets, they were savoury and just a tad spicy. Once dipped in the smoky maple syrup that came with them, the sweetness from the sauce created this excellent contrast. 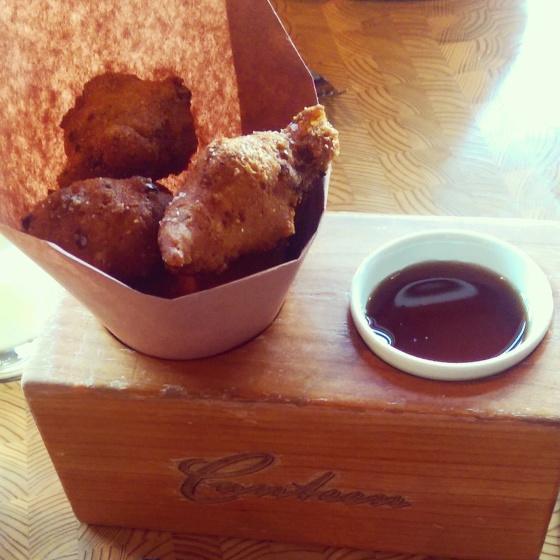 An order of the sweet and spicy corn fritters to share on our second visit!

When duck is available in any form, both of us have a hard time passing it up, so we didn’t. We each ordered the seared duck breast for our entree. Beautifully plated, the dish looked like a work of art – slightly pink meat with seared brown skin, bright green snap peas, dark beluga lentils, magenta and white butter radishes, deep burgundy cherry mostarda and dollops of green garlic. Yet, it wasn’t so gorgeous as to stop us from polishing everything away. The duck breast was the most tender I have ever eaten. You could literally almost cut the meat apart with only a fork. The meat was juicy and the skin and fat gave it some bite as well as amped up the flavour without being overly salted. All of the other additions to the plate created a fantastic balance of textures. 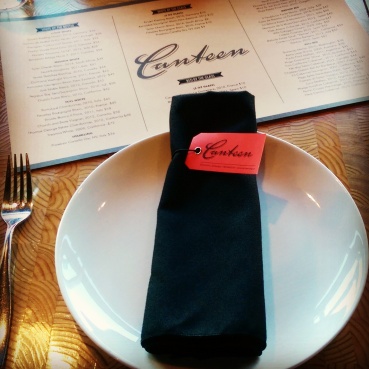 Table settings and the wine menu at Canteen.

The duck from another angle. So colourful!

The two of us opted to move along to another location for dessert, but before we did, I asked to have a look at the menu. Their amazing bread pudding, which I happily had a bite of when my friend ate it the first time, is not currently being offered. A different variation of the chocolate ganache I had eaten graces the list, as does a lemon crema and a poppyseed cake. I’m certain that no matter what is consumed here, it’ll be scrumptious.

Canteen’s dessert menu on our last visit in October.

Canteen is just one of many wonderful establishments that has popped up in the last few years, and I can definitely say that it is one worth trying.

For a more in-depth look at this establishment’s involvement in the local community and its efforts towards sustainability visit The Local Good to read my profile of Canteen (and Red Ox Inn).