Upper Crust Cafe opened in 1986, just a year after I was born, and has lived up to their initial goal of becoming a popular yet unpretentious place to enjoy a good meal. After 28 years, they are now well-known for their desserts and catering services. However, it’s their knack for making sandwiches using freshly baked in-house molasses or oat bread (other types are available; however, they are not housemade) that made me a fan several years ago.

The interior of Upper Crust Cafe.

I was dragged there by a friend the very first time I visited. She couldn’t stop telling me about the fantastic sandwiches and potato salad. Never having been much of potato salad lover, I was skeptical. But, upon sitting down at one of their distinctive green-topped tables and biting into a deliciously thick roast beef sandwich that was layered with alfalfa sprouts, tomato, lettuce, cheese, cucumber and house mustard, I was a convert. Not only were the sandwiches filled to the brim with healthy yet tasty ingredients, the included side salad was there to ensure that your stomach would be completely satisfied. I took my friend’s advice and tried the potato salad and, to this day, I find myself getting a hankering for it at times. I think what I love about the salad is that it isn’t overly creamy or eggy, which I tend to find off-putting with other variations. It’s actually been a long while since I’ve eaten an actual meal there and I hope to do so in the near future.

Bringing this back to the present though, my most recent experience there was after a hearty brunch at the Sugarbowl (@sugarbowlcafe) about three months ago. My friends and I wanted to keep chatting and decided that we would walk over to Upper Crust for dessert. Since they had made The Tomato‘s second annual list of best eats and drinks in the city, coming in at No. 78 this year, this presented a good opportunity to hit up another top 100 location. 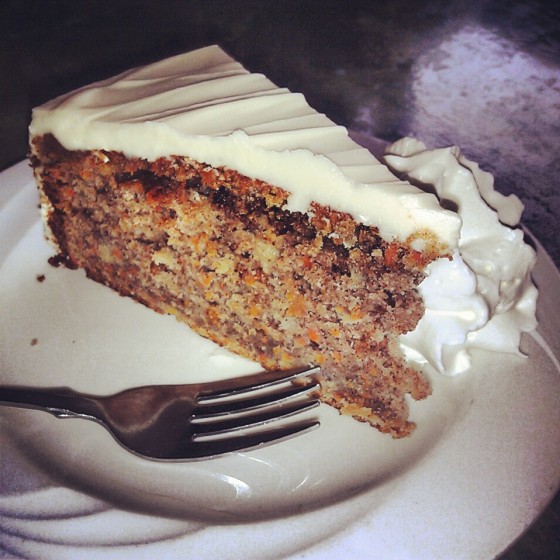 A slice of the carrot cake.

Walking into the establishment, you are met with the dessert display where every cake, pie and square looks rich and decadent. The three of us perused the choices for probably fifteen minutes, asking what each iced cake was before making our decisions. After we ordered, we made our way to a table by the window. It was rather quiet in there that afternoon, with maybe a handful of tables occupied.

My friends had carrot cake and chocolate cake with raspberry filling, both of which looked delicious. The carrot cake was without raisins, pineapple and nuts as my friend prefers. I didn’t try their slices, so all I am going off of is the appearance of the cakes. They seemed to be quite moist and fairly dense with the perfect amount of icing to go with each piece.

I went with the coconut cupcake. It was touted as the best cupcake in the city by Edmonton Journal (@edmontonjournal) writer Liane Faulder (@EatMyWordsBlog) a few years back when cupcakes were all the rage. Being someone who certainly appreciates the humble dessert, I was intrigued at the time. Despite that, I never did make my way to Upper Crust on a Saturday (the only day they are available) to eat one. That is until now. I have to say that I did like the flavour of the cake and that the icing was topped with shredded coconut; however, I was a little disappointed with the overall texture. I’m not sure if it was just this particular batch, so I can’t be definitive about this, but the cake seemed too solid to the point of being slightly dry and the icing wasn’t as creamy and smooth as I would have liked. 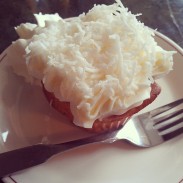 A slice of chocolate raspberry cake.

Tables and art in the far back of the restaurant.

Regardless, we popped in for a quick dessert and ended up staying for around a couple hours because we had so much to discuss. The server was attentive and, though his shift was over before we were ready to go, we never felt rushed. This relaxed atmosphere makes this restaurant a wonderful place – nice and quiet – for an afternoon or evening out with with family or friends.

Writing this review, I now find myself salivating and wanting, very badly, to eat some of their potato salad and a sandwich. I’ll be back soon to quell that craving!