De Dutch hails from British Columbia and landed in Edmonton, Alberta back in November of 2012. The entrance to the restaurant was obscured for quite a while by the construction down Jasper Avenue, so I think it remained off the radar for most until earlier the following New Year. However, customers began to learn of its existence and, by March of 2013, it had made its way onto The Tomato’s first annual list of 100 best eats and drinks in the city, coming in at number 17.

Housed on the main floor of the Cambridge Building, I finally had a chance to try it out just last week when my soon-to-be ex-co-worker (and my good friend) decided to have her going away lunch there. A group of eight of us went together.

Walking up to the door, the place is a bit unassuming, but once you enter, it’s nice and bright with a modern look, colourful seating and accents, spotless tables, and hardwood floors. We had to wait a moment for the hostess to seat us, but, as we had made a reservation ahead of time, our table (inside a private room that can hold around 10 to 12 people comfortably – I loved this because we were able to converse without disturbing other diners) was already prepared. 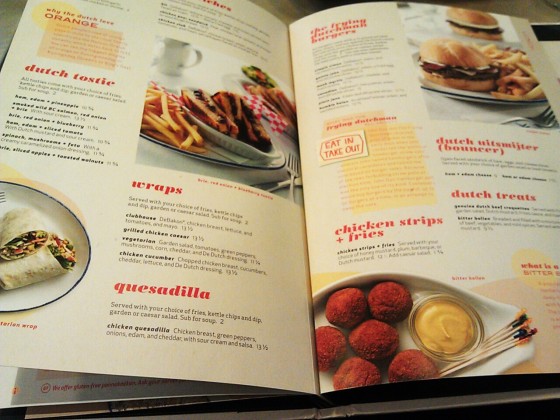 The De Dutch menu – so many choices! The Bitter Ballen in the bottom right side of this photo sounded good as well. Next time!

Since we were all ravenous, we immediately cracked open the large menus – likely around 6 to 8 pages, although I didn’t count – and were overwhelmed by the selection. The restaurant is only open for breakfast and lunch (7 days a week), so every item on the menu is available all day long until they close at three o’clock. Like the options at Cora or Tutti Frutti Breakfast and Lunch (not to be confused with Tutti Frutti Frozen Yogurt), it seems endless, so it took some of us much longer to make a decision than first suspected.

Ultimately, a few of us ended up ordering the chicken quesadilla, which was probably the most basic of the bunch. It came with your choice of side including kettle chips and dip, garden or Caesar salad, or soup as well as salsa and sour cream for dipping. It tasted good especially with all the condiments, but it wasn’t really anything super special.

One person tried a Frying Dutchman Burger, the Canadian in particular. Filled with two 1/3-pound patties, Edam cheese, DeBakon, dill pickle, mayo and house made De Dutch relish, our co-worker raved about the latter condiment throughout our meal.

Others went with the star of the menu, the pannekoeken. De Dutch says that the dish has a circumference of 37”, a diameter of 12” and can be cut into 113 square inch bites. Seeming more like a crepe, it is thin and looks airy, but is actually rich and built solidly with egg and buckwheat, so that my friends were able to dump all the toppings in The Hash (hash browns, mushroom, green pepper, onion and cheddar with your choice of ham, DeBakon, sausage, turkey bacon or veggies topped with hollandaise sauce) onto the pannekoeken and roll it up without it falling apart. The two people who indulged in that meal couldn’t stop saying how good it was and polished off their plates without a problem.

Another co-worker ordered the Abby Perogie pannekoeken. Made with hash browns, DeBakon and onion inside the pancake and topped with cheddar and sour cream, everyone who sampled a bit of her lunch said they would order that next time they ate there. 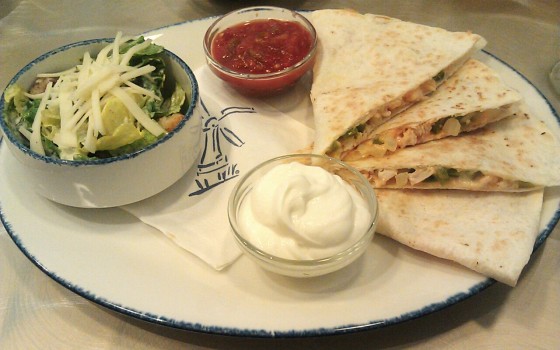 The chicken quesadilla – good, but maybe carry the pancake theme into this dish by using the pannekoeken as the shell instead and adding some DeBakon and hash browns for extra flavour and texture.

Do I think that there are things that De Dutch can do a little bit better? Certainly! I would suggest that they make the quesadilla a bit different from the norm by adding DeBakon or hash browns into it, or substituting the usual salsa for their house made relish; there’s no reason why the pannekoeken can’t be turned into something more finger food friendly like a quesadilla to give that dish a Dutch twist. Everyone at the table was also a bit perturbed to hear that the establishment was charging my friend $1.50 for a cup of hot water with lemon. I certainly don’t think a simple cup of hot water on its own should warrant a cost as that’s basic. However, there is a debate as to whether or not the lemon should be complimentary or have a price associated with it. After all, it’s an extra that is an expense for the restaurant. Perhaps they should lower the charge a little, although it’s not my place to say. But, I will note that the friends I dined with were unhappy to hear it was that high.

Despite those couple of shortcomings, it was a very enjoyable meal with a great group of people. The service was wonderful as the two servers, who watched over us for the hour, checked in to make sure our food was good, refilled our water (even brought us a jug) and drinks, and doted on our friend’s baby (if you have children, I’d recommend going here as they at least have high chairs and don’t mind you bringing in a stroller). As the restaurant is located downtown, it’s a fantastic location for lunch during the work week.

I do hope to make it back there soon, so I can try something new!