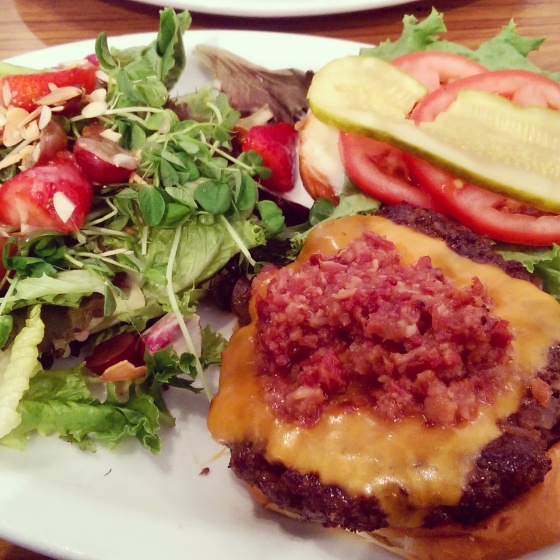 The Next Act (@NextActPub) had been on my radar for a while. I had been told by a friend that they make the best mac and cheese in the city, and the restaurant had also made The Tomato‘s list of 100 best eats and drinks in Edmonton in both 2013 (No. 61 & 62) and 2014 (No. 49). Needless to say, it was a must try. However, it kept getting pushed back until I could find the perfect opportunity to go to Old Strathcona (I don’t go there often).

As it happened, my favourite Edmonton festival, The Fringe, rolled around in August. During a full day of shows the first weekend of the festival, we had plenty of time to kill between two of them, so we planned to go to The Next Act for lunch. Issues ensued with our first show of the day and, despite running around all morning, we missed it, so we trudged our way to the restaurant earlier than intended. Since it was hot out and we were sweating bullets, we opted to skip the patio and sit indoors where there was air conditioning.

The interior of The Next Act.

Looking very much like a traditional diner with a bar added in, it’s lined with booth tables along the walls and has raised tables and bar stools all situated in the middle. The decor is a little dated, but everything is kept clean and in good condition. We grabbed the last small booth available and our server greeted us with a big smile on her face as she laid out menus on the table. Honestly, I was so beat that I couldn’t even peruse the items right away. Instead, we sat there fanning ourselves with the menus for several minutes, trying our best to cool off.

Eventually, we relaxed and started eyeing all the possibilities. They are touted for their Director and Critic burgers as well as their grilled cheese sandwich, but neither of us went for those. My friend ordered the Cornmeal Crusted Halibut sandwich and I selected the PB & J burger (the only one without a showbiz related name), both accompanied by a side of the House Salad. Water and beer – I was so excited to see that they had Crabbie’s Ginger Beer – were also imbibed.

The House Salad is a great mix of greens, pea shoots, almonds, grapes and strawberries with housemade white balsamic honey vinaigrette. The vegetarian side was a nice balance of bitter, sweet and tart. I did not sample my friend’s halibut sandwich, but crusted with cornmeal and layered with sundried tomato salsa, arugula pesto, mixed greens and mayo, I was told it was delicious. Afterwards, I mentioned to people that I ate the PB & J burger here and I was met with looks that bordered on disgust, but, if you think about it, it’s just the whole idea of a savoury and sweet pairing. A thick, juicy burger patty topped with crunchy peanut butter, bacon jam made in-house and cheddar cheese, it was awesome! I will probably try to replicate as best I can at home because I want to eat it regularly.

On a quick note, we loved the art work on the walls. I can’t really remember the artist’s name, maybe CJ, but I do recall our server saying it was the work of one of the other staff in the restaurant. A mix of modern silver framed photographs and circular painted canvases, the pieces were sort of otherworldly and real, and surprisingly more affordable than I would have thought. The colour helped to liven the decor up, too. My guess is that the artwork is rotated regularly.

A couple pieces of art hanging on the wall of The Next Act. All were for sale.

A close-up of one of the framed photographs for sale at The Next Act.

It took forever for me to give The Next Act a shot, but I finally did, and I’m certain that whenever I find myself on Whyte Avenue in the future, it will now be one of my go to choices. The stellar food and service with a smile left me beaming by the time we left.

For a more in-depth look at this establishment’s involvement in the local community and its efforts towards sustainability visit The Local Good to read my profile of The Next Act.

2 thoughts on “Edmonton Restaurant Review: The Next Act”