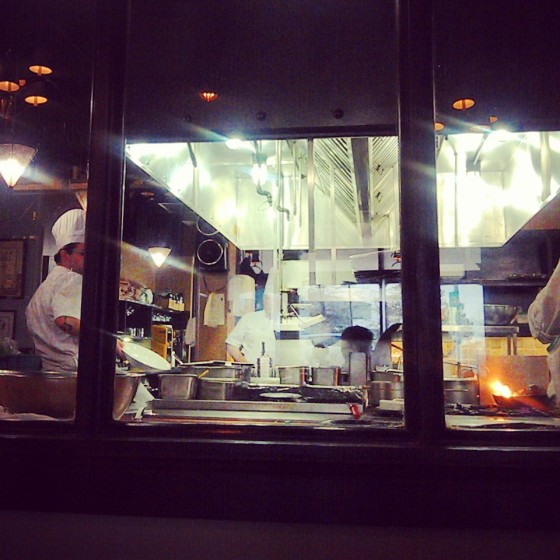 Our view into the kitchen of the Hardware Grill

Every year I look forward to the Downtown Business Association‘s Downtown Dining Week (DTDW). Why? Well, I get ten days to visit a variety of restaurants in the core of the city that may not always make it to the top of my list for one reason or another. It’s certainly not because of the food. On the contrary! More than likely it is due to the fact that I probably can’t shell out a hundred dollars for a meal on a regular basis. In jumps this event to save the day. This March was no different.

The very first establishment my friend and I decided to visit this time around was Hardware Grill (@HardwareGrill). A mainstay of the Edmonton food scene since 1996, the restaurant has continued to rack up accolades both locally and nationally, including making The Tomato‘s list of 100 best eats and drinks in Edmonton two years in a row now (No. 19 in 2013 and No. 30 in 2014). Considered to be the pinnacle of fine dining in this city, we walked over to the brick building with the striped awnings on 96 Street and Jasper Avenue for a relaxing dinner after a busy Monday at the office.

Upon walking into the doors, we were promptly greeted by the hostess who acknowledged our reservation, hung up our coats and showed us to our table. On a previous visit I had sat at the front of the restaurant, which provided a view of the street, but this time we were seated by large glass windows that gave us a view of the chefs working in the kitchen. We could literally watch our meals being made in front of us. That was a nice surprise and a fun touch of whimsy to be able to peer behind the scenes. 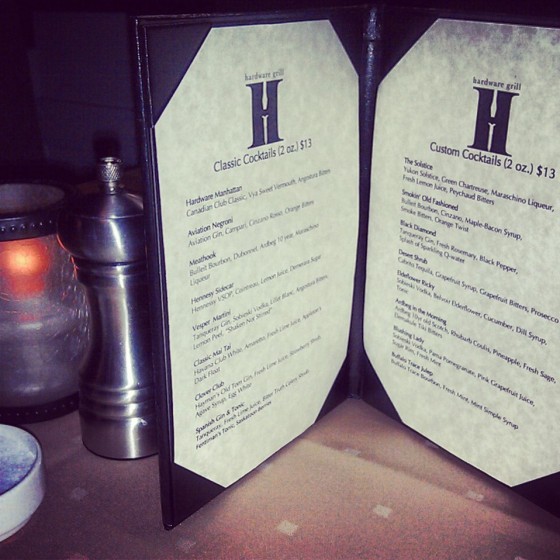 Our wonderful server, Luis, came over to explain the drink (a nice list of custom cocktails that can also be found at their sister location, Tavern 1903) and wine (extensive) menus as well as the DTDW selections. Both my friend and I opted to go with the three-course dining week dinner. We really couldn’t go wrong. Between the two of us we were saving about $50 on our meals – compared to a regular evening there – and we could use some of that money towards beverages (we each had a glass of wine). It was definitely the best option for us.

To start, we were brought a bowl filled with a variety of soft bread slices and a dish of earthy extra virgin olive oil, which was paired with sea salt for dipping. I’ve been told that you can tell just what you’re in for at a restaurant based off of the bread, so this was already a great sign of things to come.

For our appetizers, we decided to each order something different, so we could sample a larger number of dishes. Since my friend loves gnocchi, as do I, we shared a plate of the venison ragu and potato pasta with shaved parmesan. The freshly made gnocchi was nicely browned and crisp on the outside (the way it should be) and the venison added some extra bite and texture to the dish. It’s sad to point this out, but this appetizer is not to be found on their regular menu, so if you’re hoping to try it, you are probably out of luck. However, I will note that we each ate only half and I have to say that if either of us had eaten the entire plate, it could have served as an entree in and of itself. Thankfully, we had room for more! The first course that I went with was a much lighter on the palate and a variation of it can be found there on a usual basis. This was the fresh burrata mozzarella with pepperonata, crostini, fennel marmalade and fig balsamic. The portion size of the mozzarella was huge and paired with the extras it was a star and a great balance to the heavier, but equally delicious gnocchi. 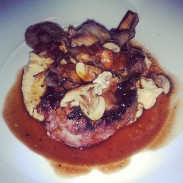 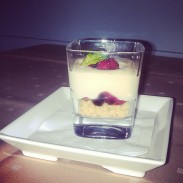 As I’m unlikely to buy and make myself a veal chop at home, I thought that this was an opportune time to sample their grain fed version for my main course. My friend followed suit for most of the same reasons, but also because the fennel salad that accompanied the potato crusted cedar plank salmon had crab in it, which she’s allergic to. Neither of us were disappointed in our decision though. The massive veal chop, covered with maple bacon, mushrooms and Cipollini onions, was plated on top of a creamy polenta, tomato confit and it’s own natural reduction. The dish was as good as it sounds, but not to the point where we could both polish off the entire thing. The portion size was so large that the two of us each left half of the food on our plates, making Luis worry that we didn’t enjoy it. We reassured him that wasn’t the case – we expected to take the other half home for later. Room needed to be saved for dessert!

Again, we both chose the same dessert. Really, that’s kind of the one part of the meal that’s the hardest to share. While I’m sure their marble brownie would be amazing, we went with the liquid cheese cake parfait – layered salted shortbread crumble, rhubarb-Saskatoon compote and creamy, almost like a greek yogurt consistency, cheese cake that was to die for. I would have eaten this for all three courses.

If anything, that dessert describes the Hardware Grill and the food they serve – textures and flavours that are rich, vibrant and layered to build depth. Their consistency and attention to detail in the kitchen parlays into the rest of the restaurant. The service we experienced was exceptional from the moment we walked in to when we left. Luis made it feel like we were old friends and the hostess gave us a fond farewell for the evening.

For a special occasion or just a quiet night out with a friend, this classy restaurant fits the bill.