The front of the restaurant with the matte signage on the window.

A few years ago, I still lived at home. My mother owned a shop downtown in what is now known as ATB Place and the two of us would carpool to work together. My first encounter with Corso 32 (@CORSO32) was on one of those rides as we cruised along Jasper Avenue. One day, I happened to be looking out the passenger window as we headed east, and I spotted a small tenant space with a window that had just been christened with the name ‘Corso 32’. Matte transferred signage was all that distinguished the soon-to-be open restaurant from everything else that vied for your attention on this street. As such, it seemed to get lost in the fervor and it took a while before I managed to point it out again.

Fast forward to 2014 and I still hadn’t visited what is arguably now the best restaurant in Edmonton. I had heard countless recommendations from food critics, bloggers and friends, but, for some reason, I just had not been there. Having started my quest to visit all the restaurants, cafes and farmer’s market booths listed on The Tomato‘s list of 100 best eats and drinks in Edmonton, I realized that, if I was to truly get the full experience of their list, I would need to eat at the establishment that has topped it for two consecutive years now. 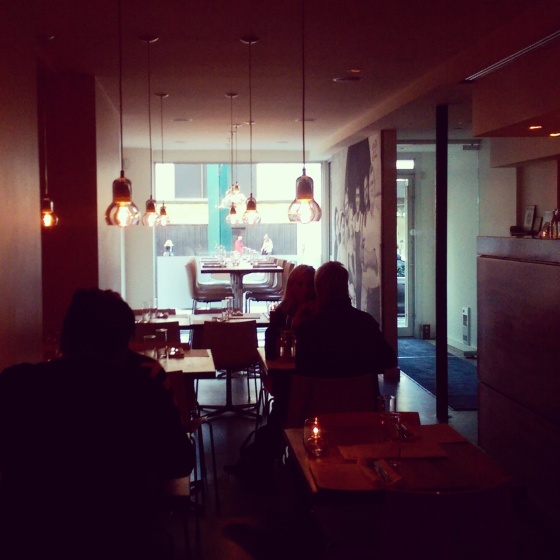 Our table was near the back of the restaurant. As you can see, it is quite small.

Knowing that Corso 32 is very small and also often has to be booked far in advance, I looked into making a reservation with the restaurant. They utilize the handy Yelp SeatMe system, so I was able to search for available times using the computerized calendar. Only serving Wednesday to Sunday from 5pm to 11pm, I wanted to dine there after work, so I wouldn’t need to go out of my way to get there on a weekend, or have to kill an exorbitant amount of time between office hours and my meal, so I kept clicking on various dates until a 5:30 opening on Wednesday, October 8th popped up. Booked about a month and half in advance, it’s not a lie when people say that it is difficult to get a table there on short notice. Seeing as how I didn’t really care when I ate, just that I did not want to have dinner at 9pm in the evening, I was okay with this. A table for four (all I could get), I had my dining companions lined up and ready to eat with me.

The evening finally arrived, and being that it was fairly early in the evening, it wasn’t full by any means. I learned later that they give each table a two and a half hour dining limit, so they can be sure to fit in two seatings each night. Not aware of that, our meal ran a bit longer than the allotted time as we opted to try and wait until a friend who was running late could join us. In the end, we were starving, so we went ahead and ordered our food without her.

The drink and food menus.

The delicious full-size bowl of arancini.

Two of us opted to quench our thirst with glasses of sparkling lemonade while my other friend drank a couple of craft beers. To begin, we all shared a full size bowl of the arancini. If you have not had arancini before, it’s basically risotto shaped into balls, breaded and fried. Corso’s arancini is filled with speck (a fatty bacon or pork fat), cabbage and Fontina cheese. The balls are then decorated with finely grated Parmesan cheese. The dish is rich with a somewhat smokey flavour and entirely indulgent, but so worth the calories. I actually meant for it to be part of my main meal, which I had planned to pair with my plate of fried short rib. Unfortunately, the arancini was so good that it disappeared before the other dish was placed in front of me.

I have a love affair with short rib. When it’s cooked properly, the meat falls off the bone and it is so tender that it practically melts in your mouth. The fried short rib antipasti at Corso was just that. Served with a side of crostini and topped with shaved pear and arugula salad, it was another winner. I actually mistook the pear for radish, probably because they garnished the dish with radish as well. But, I should have paid more attention and realized when the flavour profile of the salad was more sweet than peppery. At the last minute, I also decided to get the side of beets. Prepared with ‘agro dolce’ (sour sweet) sauce, salted ricotta and crushed pistachios, it was a great accompaniment to what was left of my meat. The portion was also quite large, so I ended up taking quite a bit home for lunch the next day.

My side order of beets.

The fried short ribs with crostini.

A close-up of the fried short ribs with the pear and arugula salad.

My two dining companions that were there chose to go with pasta dishes, which are made in-house from scratch. One decided on the cavatelli, the other the ricotta agnolotti. I had a bite of each, and they were both delicious. The pasta shells of the ricotta agnolotti were thin and cooked perfectly. It was actually a much lighter dish because the ricotta is creamy, mild and soft in texture. Paired with the swiss chard from Sundog Farm (@sundogfarmer) and a thin butter sauce, it didn’t seem like it would be too filling. On the other hand, cavatelli is thick rolled pieces of pasta that were served in what tasted like a rose sauce with spicy pork and fennel sausage, broccoli rabe and Pecorino cheese. The pasta was toothsome as the sauce was velvety, the sausage added a slight heat, the rapini brought some crunch to the texture of the dish and a little bitterness and the cheese a bit of saltiness. As my friend put it, it was like the food was making love to her mouth. I told her I would likely paraphrase her! 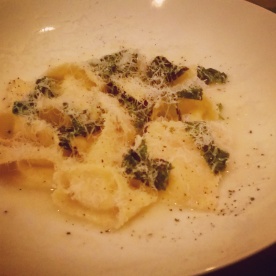 Our fourth finally made it as we were about to order dessert. Thankfully, our server knew her and she happens to be a regular there. Otherwise, they might have shooed us out earlier to make room for the second coming of diners (I’m so sorry to the people who arrived and ended up having to be seated in their sister business, Bar Bricco (@BarBricco), next door, which I’m sure is lovely as well, but not what they expected).

Three of us opted for the chocolate torta to finish off our dinner. Presented with salty, candied hazelnuts, it had that sweet versus savoury combo that I love. Wonderful as it was, I think two of us could have shared and it would have been more than enough to satisfy us both. It’s not actually a huge dessert, yet it is incredibly decadent and I found myself “forcing” it down because I knew I couldn’t let any go to waste. One person decided to go with the vanilla panna cotta, which was made with vin cotto, honey grappa and pistachios. I did not taste it, but it looked yummy, too. 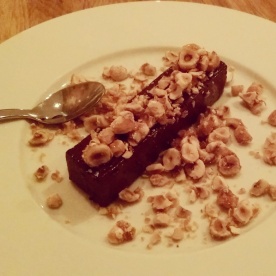 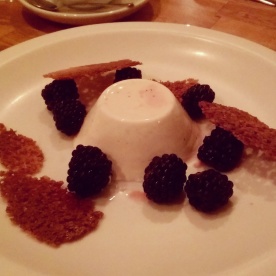 By the end of the evening, the restaurant was pretty much at capacity and so were we. I had been told so many things about the eatery in the last two years that I had become worried that my expectations were too high, but the restaurant proved me wrong. I understand why Corso 32 and Chef/Owner Daniel Costa have the reputation they do. The food is fantastic, and the establishment is a good representation of how far Edmonton’s food scene has come and where the city’s foodies hope it will continue to go. Will Corso 32 top my own list of E-Town’s best restaurants? You’ll have to wait and see.