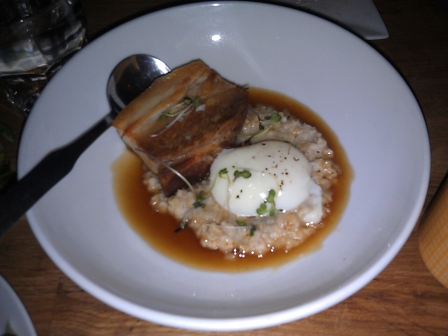 We might be a little late to the game, but my friend and I recently came across The Tomato Food & Drink‘s list of the top 100 best things to eat or drink in Edmonton. Naturally, the two of us decided that we would use 2014 to make our way through, at least, each and every restaurant, market or merchant mentioned. I say “at least” because some of the places are cited more than once as the list consists of not just, for example, the venue as a whole, but, rather, specific dishes or beverages.

The first establishment we chose to visit was Three Boars Eatery (@ThreeBoars). I’m not sure how long the restaurant has been around, but I only recently realized that it has been tucked along 109th Street and 84th Avenue. We dined on a chilly Thursday evening, arriving a little early for our reservation. Walking up to the door, it was unassuming. Stepping into the place, we were practically standing at the bar, which had a couple of patrons already dining. The space on the main floor is mostly taken up by the kitchen, and the seats that are available consist of stools in front of the bar and along the window that looks out to the street.

As soon as we entered, the bartender acknowledged us and the host came down to greet us. Since we had made a reservation, our table was ready despite our premature appearance. The dining room on the second floor is quite tiny – only eight tables that seat a total of 26 people in various configurations. However, it didn’t feel cramped or like we were in the midst of someone else’s conversation. Sparsely lit upstairs, it certainly set a mood – intimate, yet cool with its rustic wood and lack of extraneous decor.

Our server explained how the menu works – all plates are meant to be shared tapas-style and, for two people, she recommended ordering four to five dishes. The two of us mulled over the menu for a few minutes and opted to choose two each. I chose a caramelized onion and oka tart along with the pork belly. My friend chose a roasted carrot and beet salad plus the lamb neck croquette. We both ordered a drink as well.

Upon ordering, we inquired if the four dishes would be enough and the server reassured us that it was. Our drinks were brought over promptly and the food made its way to our table at regular intervals shortly after.

The first plate we had was the lamb neck croquette, which was essentially shredded lamb shaped into a cylinder and breaded on the outside, so it had a crisp outer shell and warm meaty center. The two croquettes (perfect for sharing) sat atop what I believe was a vinaigrette with lentils and was garnished with some sort of slaw (I really should have paid more attention to what it said on the menu). I really enjoyed this dish. The bite to the meat with the consistency of the breading married well with the crunch of the slaw, and all of that soaked up the delicious sauce.

Plate number two consisted of the roasted carrot and beet salad, which also contained pickled egg, mixed greens and smooth goat cheese. I’ve never been much of a fan of carrots, beets or pickled anything, but I’m willing to give almost everything a try and I have to say this was a fantastic salad. The beets were tender, the carrots weren’t too hard, the egg was nice and soft and they did not skimp on the goat cheese (the best part!).

The remaining two dishes arrived as we were just finishing our salad. We began with the tart. To be honest, I could not remember what oka was when I ordered the dish, but I’m a bit of a sucker for a good pastry crust and it just sounded tasty. I wasn’t wrong. It is a simple dish, but one that I think has wide appeal. The sweetness of the caramelized onions layered with the copious amount of warm, melted oka cheese and the slight bitterness from the arugula that topped the tart made it delectable. To finish off, the two of us split the pork belly dish. The belly is quite fatty – something I tend to forget – but it was cooked in a way so that the outside was browned and the meat had a springiness to it. To the side was, I’m guessing, steel cut oats (based off of the sample menu I pulled off their site and posted above) with a poached egg. All of that was sitting in a pool of broth. We split open the egg and the yolk ran out and mixed with the broth and oats. The result was a slightly salty meat with a side of what reminded me of a creamy custard in terms of texture and taste.

While we were too full to indulge in dessert, we weren’t rushed and were able to chat over what was left of our drinks. All in, the bill came out to just under $40 per person, not including tip. 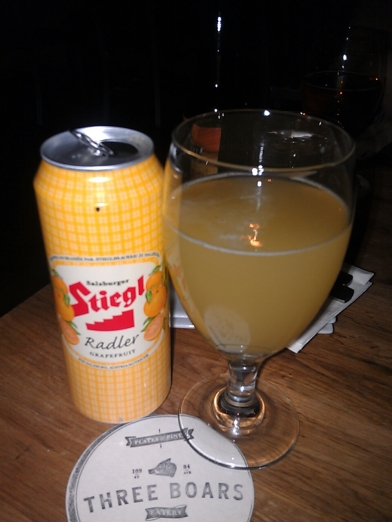 I really enjoyed the evening and the food was memorable. In fact, with their menu changing so frequently, I would certainly consider returning to try some different items. Although that likely won’t be anytime soon, I would say that the service and the thoughtful preparation to the dishes will keep this place firmly planted in my mind for the future. And, since the cost can be a little high depending on the plates ordered, it may be a special occasion that finds me there next.