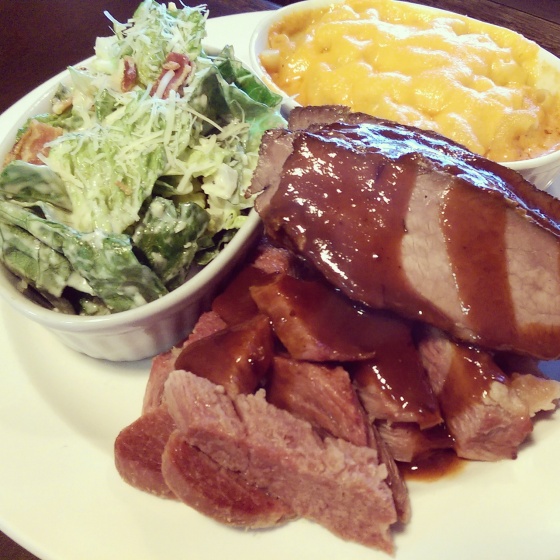 Southern barbecue has become a favourite meal of mine over the last few years. It’s homestyle cooking at its finest, and while I’m not that hard to please – give me pulled pork doused in sauce and slapped on a bun any day – you know good BBQ when you taste it. Down south dishes are becoming more and more pervasive on restaurant menus around Edmonton. Chicken and waffles are almost a staple nowadays. But, what’s the best way to experience true southern food? I’d argue it’d be without the need to batter or deep fry the meat.

This city doesn’t really come to mind when you think of Texan food or smoked meat. Montreal maybe, Edmonton likely not. However, my love of a deal led me to Groupon where I found a voucher for a restaurant called TW’s BBQ Smoke House. This is a place that wasn’t anywhere near my radar. Located in High Park just east of the Mayfield area at 152 Street and 111 Avenue, it never really occurred to me that there would be a restaurant there for me to try. So, feeling adventurous, I clicked on the “Buy!” button and planned for a new dining excursion.

My parents joined me there at the end of June. As we drove down 111 Avenue, it was pouring rain as we kept our eyes peeled for a sign of the establishment. I spotted it a short distance away tucked between Tumbleweeds Texan & Latin Grill (same ownership) and a liquor store. An old strip mall, the outside isn’t that appealing. However, we parked the car across from the door and dashed inside to get out of the rain and I was pleasantly surprised by the interior. Decorated in neutral browns and taupes, it was simple. Clearly, it had been renovated and painted, and the upkeep looked good. Some metal cutouts in the shape of flames provided a slightly stylish flair and separation from the kitchen. 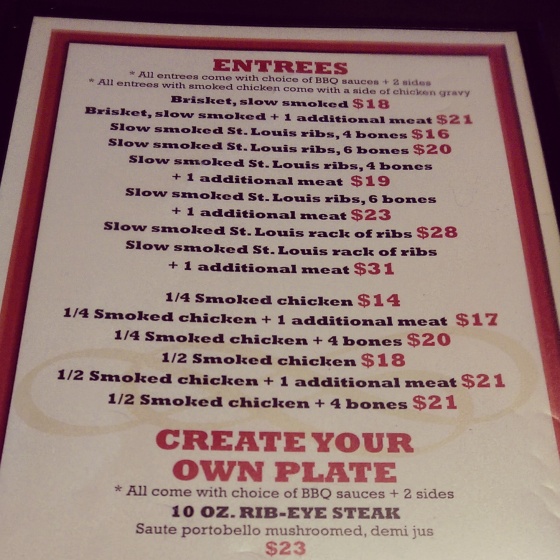 We were greeted quickly by a very friendly server who guided us to a booth by the windows. She was great with the recommendations throughout our decision making process and she was attentive during our entire stay. Being me, I opted to go with the Pulled Pork sandwich. My parents decided to share a half chicken with one additional meat and two sides.

My pulled pork sandwich was delicious. The meat had shed itself from the bone while cooking and was tender and succulent. It came on a garlic toasted kaiser bun with the pork smothered in their signature hickory mesquite smoked BBQ sauce (apparently it goes with anything). A side of coleslaw was provided as well, which I added to my sandwich for a little extra tang and texture. I chose the cornbread muffin as my side and that was slightly disappointing. It tasted quite nice, but it was a bit dry and kind of small compared to everything else included with dinner.

The half chicken my parents ordered was roasted to perfection; the meat was incredibly juicy and melt-in-your-mouth. My only qualm is that there wasn’t enough hickory apple smoked BBQ sauce to go with it. Any chicken not covered by crispy skin lacked a bit of flavour that would have been compensated with just a bit more sauce. For the additional meat, the choice was beef brisket. Again, the meat was prepared so that it fell apart easily without the use of a knife. The portion size was huge with the slabs of meat each almost an inch thick. On top of all that, they also received a side of caesar salad and five cheese baked mac and cheese. The caesar salad was kind of run-of-the-mill, but pretty tasty nonetheless, and the mac and cheese was better than I expected, especially when it’s piping hot as the sauce is creamier and the cheese melty the way it should be.

All-in-all, I would say that the meal was a home run. The food was savoury and the service was excellent. I even went back again in July and, this time, with a couple more people, we managed to try a few more things including their slow smoked St. Louis ribs and Montreal smoked meat – I’m not usually a fan of Montreal-style smoked meat, but this was fantastic. The beef brisket on this occasion was, unfortunately, a little dry, but still flavourful, and the leftovers were yummy when put into my noodles and soup at home the next day. We also tried each of their desserts including crème brûlée, apple pie and deep fried cheesecake. Between the five of us, we polished off each plate, but we all agreed that the cheesecake was the best.

Having never been to the deep southern states, I can’t truly give a good comparison of Edmonton Texan barbecue versus actual Texan barbecue, but I can say that I enjoyed both of my visits to TW’s BBQ Smoke House. If anything, you should go and form your own opinion of the restaurant. I don’t think you’ll be disappointed.