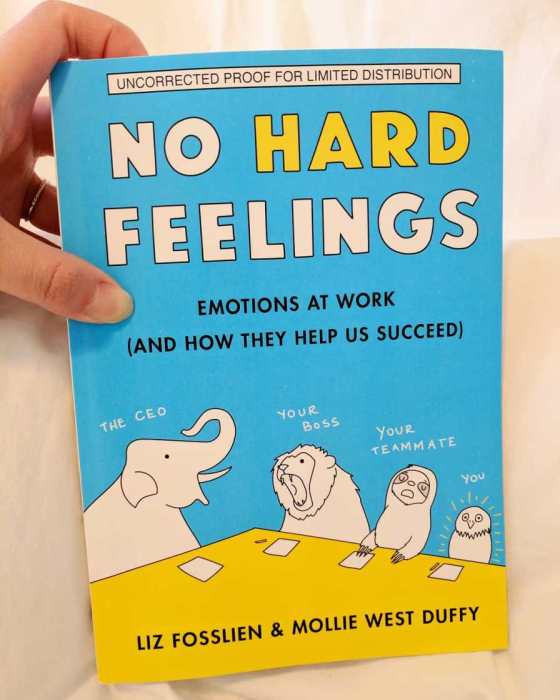 My uncorrected proof of No Hard Feelings.

Since the beginning of 2019, one of my resolutions for the year has been to read at least one new book every month. Honestly, that’s not a lot. When I was a child, I devoured books like candy. Over the summer, you would find me at the library getting my hands on as many novels as they’d allow me to have at one time. But, nowadays, I’m finding that this past love has been put on the back burner.

I can say with pride that, since January, I’ve been very diligent about sticking to this particular decision. In fact, it’s probably been the easiest of my multiple resolutions to abide by. Yet, unlike the first few months of the year, in April, I shifted from fiction over to a book about business culture. Written by Liz Fosslien and Mollie West Duffy, No Hard Feelings: The Secret Power of Embracing Emotions at Work, is something I wish I had read when I initially came into contact with the uncorrected proof that I own. Instead, it sat untouched for almost six months.

While it might be beneficial to give my readers a full recap of the book, I won’t do that. I urge those who might be grappling with difficulties at the office or in their careers to borrow or purchase a copy and read it all the way through. It’s written incredibly well with charming images and anecdotes as well as real-world examples that help you understand how the issues the authors discuss might play a role in your day-to-day workplace situations. Personally, I found it to be an easy, relatable and insightful read.

Broken down across seven chapters — Health, Motivation, Decision Making, Teams, Communication, Culture, and Leadership — that dictate the new rules for work, these were my favourite takeaways:

I’m so guilty of this. Lately I’ve been overwhelmed with the workload at my office. I feel bad about not being able to get through more and I feel bad about leaving things behind every day. But, I really shouldn’t be put in that position. It’s not my fault that we don’t have the resources needed to accomplish everything that the organization expects of us within the time frame that they have dictated. I’m simply one person who can only do so many things at a time. Rather than feeling bad about what I’m not able to get to, I should feel good about what I am able to achieve on a daily basis.

2) Motivation: To increase your autonomy, make small changes to your schedule.

I love the idea of this notion, but it is easier said than done. I believe that the amount of autonomy you have with your schedule is very dependent upon the flexibility of your workplace. Despite providing valid arguments to management about working different hours or from home, my organization usually isn’t willing to negotiate. Yet, if they’d budge just a little bit, it could make a world of difference to my overall health and happiness.

People have a tendency to bring outside feelings into the decision making process at work and in their personal lives. It reminds me of a scene from How I Met Your Mother in which they discuss the cycle (or circle) of screaming. For example: perhaps we ran into issues on the way to work, which have already put us in a bad mood. Someone has a great idea, but we don’t want to listen right at that moment, so we brush it off because we’re preoccupied with what occurred before and it clouds our judgement. It’s important at those times to compartmentalize those emotions as they don’t actually have anything to do with the other. All too often, we let negative forces take control when they should be ignored instead.

4) Teams: Get rid of (or if you can’t, contain) bad apples to preserve psychological safety on your team.

I’m not a manager, so I don’t have much say over what ultimately happens when it comes to hiring or firing someone. But, I’ve had my fair share of issues that I’ve had to bring up to my boss. Unfortunately, most have gone unresolved. A good manager would do their best to rid of or contain the bad apples on the team, so that the rest of the members can excel without worrying about picking up the slack or being overwhelmed by the demands of other co-workers. If you’re on a team that has bad apples, don’t let it slide. Make it known to higher ups because, if they’re any good, they should want their staff to feel safe and valued.

Your personal feelings about someone should not come into play when judging them on how well they can do their job. You may have many things in common with a colleague; therefore, you get along better with them. But, just because you’re friends, it doesn’t mean that they might be the best at handling their responsibilities. Vice versa for those who you may not be buddy-buddy with. They might be amazing at their job, but they never get the recognition because you’re not as close. It’s important to look at the facts as they are presented without bringing other outside factors to the table.

6) Culture: Create a culture of belonging through microactions.

I have to say that I’ve shied away over the past few years from getting to know a lot of my co-workers better. Aside from those that I work directly with (most of us are good friends), I have a business relationship with the rest and that’s about it. However, I don’t think that my company has done a great job of integrating people together either. I’ve found it especially true when it comes to new hires. The last handful of staff who have started with the organization were announced by email with no other attempt by management to introduce them. The least they could have done was brought them around to each department to say “Hi,” but it never happened. When higher ups don’t care enough to create a welcoming culture, it’s certainly not going to trickle down to the rest of the staff as something that is important.

7) Leadership: Become a student of the people you manage.

As the book says, avoid telling people what to feel, listen carefully, and manage individually. I’ve noticed in my office that management doesn’t like to approach staff directly with issues that arise. Instead, it’s either avoided entirely, or a mass email is sent giving notes on how something should be done when usually it’s only one or two who are the culprits of incorrect processes, etc. I believe that addressing problems in that way makes those who are doing things properly wonder what else they might have done wrong when, in fact, they haven’t made a misstep at all, and it downplays the issues for those who actually screwed up.

Additionally, I think managers often sit on a pedestal and think they know best when it comes to the day-to-day for their staff. A lot of the time, managers fail to listen to their employees or walk in their shoes before making big decisions that ultimately affect everyone else. Taking the opportunity to learn the actual responsibilities of their team members is a huge step in the right direction when you want to lead properly.